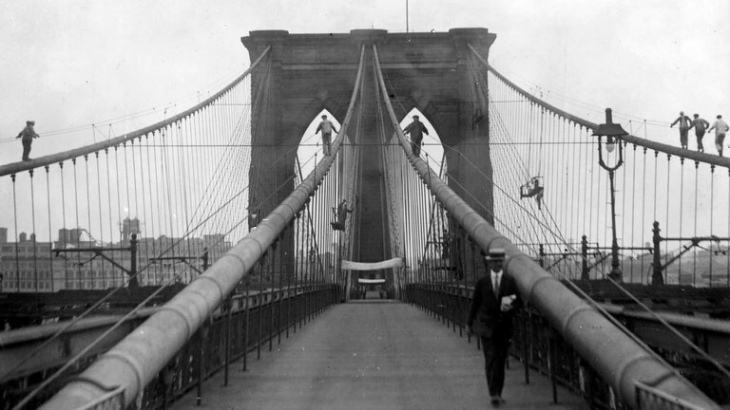 Brooklyn Bridge’ (58 minutes)
Where to watch: Stream it on Amazon Prime, Kanopy or Sundance Now.

Burns’s Academy Award-nominated first feature, from 1981, pays tribute to the Brooklyn Bridge — a majestic feat of engineering that the director frames as a symbol of the indomitable American spirit. While making this documentary, Burns pioneered what came to be known as the Ken Burns effect, whereby the camera slowly pans across or zooms into a still photo. When a viewer at an early screening asked him where he’d found all the footage of the bridge’s construction, he was confused until he realized that those dynamic shots had given her the impression that his archival stills were actually moving images. (The film is often packaged today as the first installment of Burns’s “America” collection.)
—

‘Defying the Nazis: The Sharps’ War’ (1 hour 19 minutes)
Where to watch: Stream it on Netflix or Kanopy.

Burns frequently profiles historic figures, but “Defying the Nazis” tells the story of two American heroes who never became household names. Years before the United States entered World War II, a Unitarian minister named Waitstill Sharp and his wife, Martha, traveled from their Massachusetts home to Czechoslovakia, where they helped Jews and members of other vulnerable groups escape the Nazis. Burns collaborated with the Sharps’ grandson Artemis Joukowsky to recount their courageous mission in a film that features interviews with people who knew the couple, along with letters read by Tom Hanks and Marina Goldman.

Martha and Waitstill Sharp departing New York for Europe in 1939, as seen in a photographic still used in “Defying the Nazis.”Sharp Family Archives

• Published writer that used to contribute a monthly article on any given subject to my local newspaper. I am no longer doing this and miss it. • Owned my own custom paint store, "Wild Woods". I called it "wall art" that consisted of murals, glazing, faux painting and also painting vinyl garage doors to look like wood or metal; usually copper. • Have had an interesting past 14 years living off the grid in a remote area in Southern Utah near the Coral Pink Sand Dunes State Park in a progressive community that held many informative events with guest speakers, including a number of published authors, and hands-on exercises in various self-sufficient living. No longer living there. • I have another blog about grandparenting. This is a subject near and dear to my heart nowadays. *As part of "the sandwich generation", I was caught between helping my adults kids (usually with their kids) as well as caring for an elderly parent, my mother, who was suffering from dementia. I want to do some writing on the aspect of full time care givers to people with Alzheimer's as well. I feel I have learned a lot about this. ~ What a Juggling Act! Somewhere with all those balls up in the air, my own dreams had been put on hold for too long and now, after losing my mother just recently, and my grandkids in school, I hope to rekindle them. My husband and I are super busy doing major remodeling jobs on a house we purchased two years ago as well as extensive yard work. The house and yard projects, which include the restoration of an old cottage built in the 1800's that sits on the far, back corner of our three-fourths acre lot we own are keeping us both really busy. Amidst the ongoing projects, I try to squeeze in a moment here and there to work on my blogs. Creativity has always been an essential part of who I am and when I stop doing things like this, I feel like a robot mechanically moving around, just getting the necessities done. Art, Music, Writing, Gardening, Home Interior Decorating, Water Activities like swimming and kayaking are the things I crave and try to find time to do. We have to "make it a good day"! View all posts by Mary Catherine